This is a text widget, which allows you to add text or HTML to your sidebar. You can use them to display text, links, images, HTML, or a combination of these. Edit them in the Widget section of the Customizer.

Chairs from the fabulous Falsterbohus Hotel

Construction work on Falsterbohus Hotel began early in the twentieth century and the building was inaugurated in 1908.

The cream-coloured architectural confection was to become the most luxurious seaside hotel in southern Sweden – if not, indeed, in all the land. A resort that was in every way the equal of similar fashionable establishments abroad. 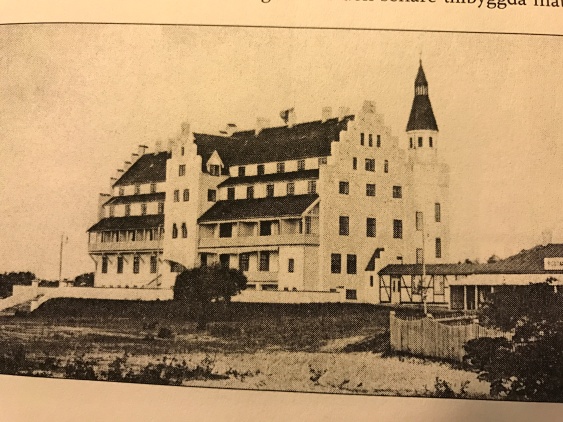 The most luxurious seaside hotel in southern Sweden Falsterbohus 1908

‘The house’, as it came to be known, attracted royals and celebrities from near and far. Guests could rub shoulder with authors, aristocrats, musical maestros, Russian princes and business tycoons, along with other visitors who preferred the dance floor to the beach, and locals of every stripe and type. It was, it must be said, a most magnificent mix.

It stands to reason, then, that the chairs in the dining room had to be special, too. Just think of all those who have used them over the years. In 1967 Maharishi Mahesh Yogi arrived here with his transcendental meditation, and in his wake followed George Harrison and Paul McCartney of the Beatles. Naturally, meditation was on the menu: it had never been more in vogue than it was just then.

Our Swedish princesses could be spotted from time to time in the dining room, as well as our current king, in what was then his role as crown prince. You might even have bumped into ex-King Simeon of Bulgaria on one of his visits. And while Count Basie’s Orchestra played in the casino, the blonde summer nights smiled mild and sweet over Sweden’s most south-westerly shore. 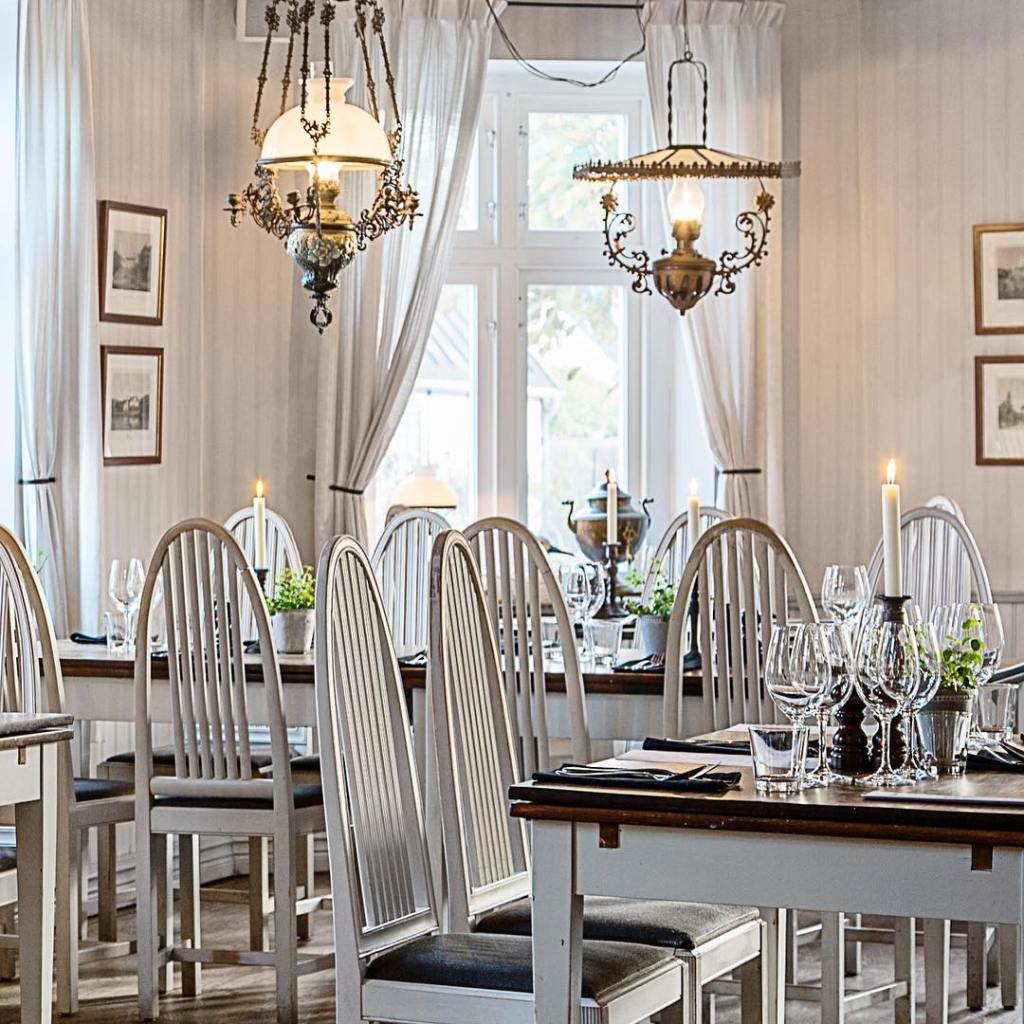 Today Falsterbohus has been converted into a number of tenant-owned apartments, its furnishings long since spread to the four winds.

Happily, the chairs -their elegance and beauty belying their relative modernity -have found new homes. Some were purchased by a nearby inn, Skanörs Gästgifvaregård, and I’m pleased to say that there they remain in everyday use, much to the delight of all of us who can still recall that ‘once upon a time … ’

My attention is attracted to an old photograph, so fuzzy and unclear that I’m struck by a desire to grab hold of a duster to freshen it up. You know the feeling – like standing outside a dirty window that you’d like to clean, so you can see through it more easily. But I’m no peeping Tom and this is no window. It’s a photograph from around the turn of the century 1900. 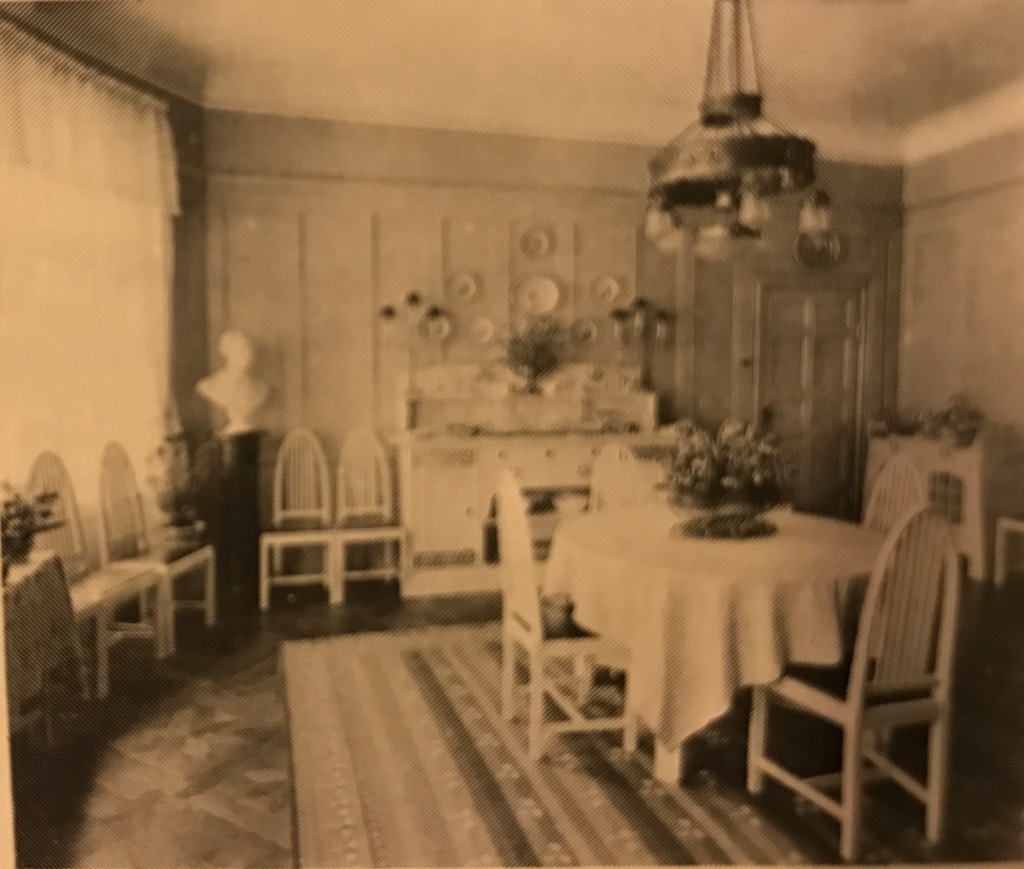 On close examination the details appear to suggest the interior of a dining room somewhere in Stockholm many years ago, with chairs of this very type, beautifully formed, light, bright and modern for their time. The same type of chair that was once ordered for Falsterbohus.

Perhaps we can describe the chairs as good representatives for 1920s classicism and its elegant epithet of ‘Swedish Grace’, an expression first coined by the journalist and art critic P Morton Shand, grandfather of the Duchess of Cornwall (consort to the Prince of Wales).

One Swedish daily claims that ‘Swedish Grace and Art Deco are the names of two partly parallel styles that both reached their zenith around the time of the 1925 Paris Exposition’.

It was the expression of a longing for designs that were more restrained, a desire to revert to the classical ideals of the late 1700s. The whiplash curves and prolific ornamentation of Art Nouveau had left many people with a certain sense of aesthetic fatigue.

Note from the Editor:

The Please Be Seated books, which this blog is an extension of, have been created over the past five years. Each historic chair tale has been lovingly written by author Gun Bjerkander Handberg and translated into English by Ian Hinchliff. It has been an informative and entertaining collaboration.

I thought I would share a photo of the author, editor and translator (and the translators wife) at a recent dinner in Skanörs Gästgifvaregård, sitting on the very chairs described in this blog, originally from Falsterbohus.

And so the chair tale continues…………